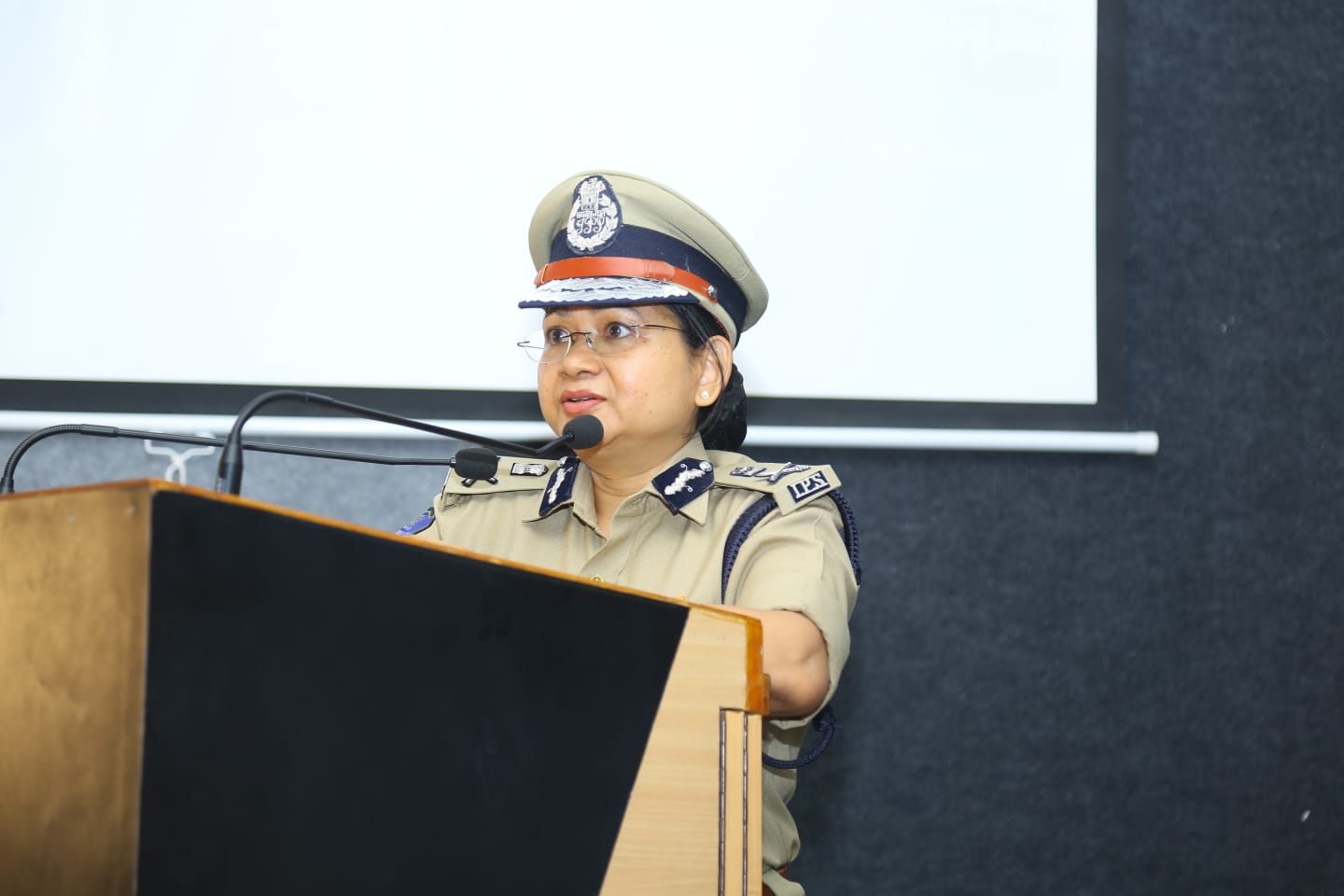 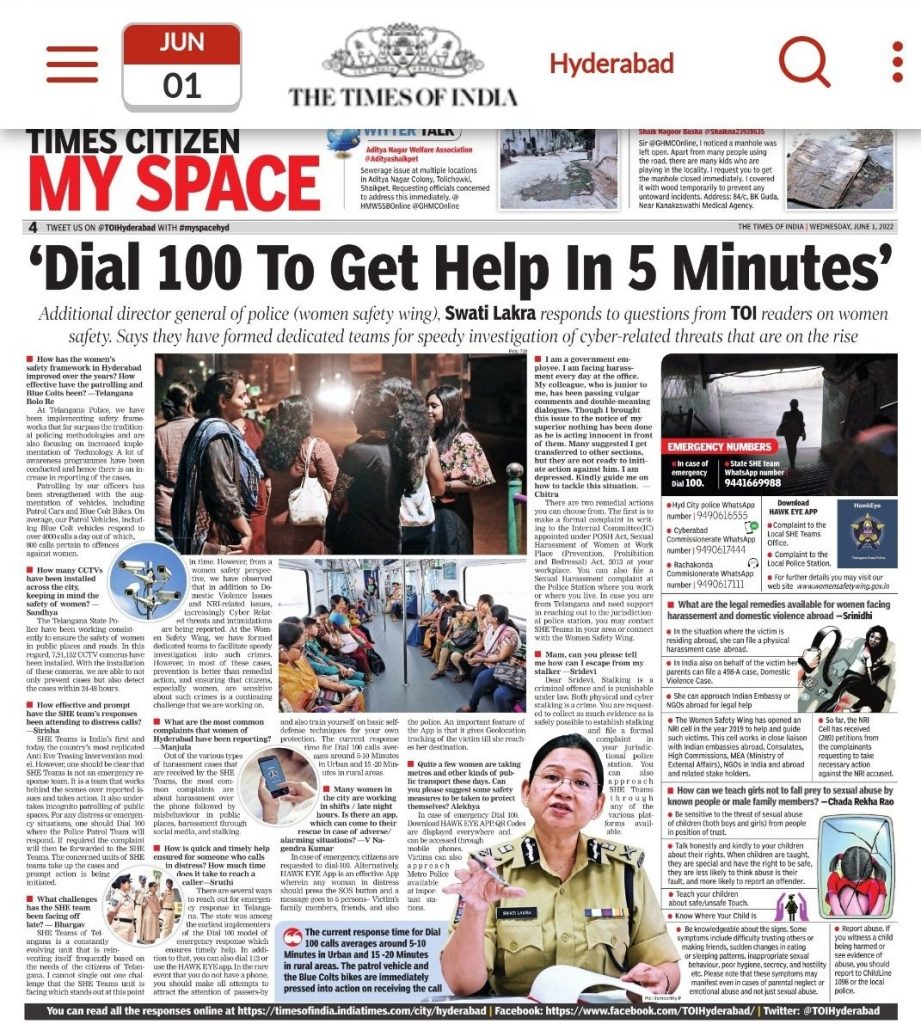 How has the women’s safety framework in Hyderabad improved over the years? How effective have the patrolling and Blue Colts been? —Telangana Bolo Re

Smt. Swathi Lakra IPS – At Telangana Police, we have been implementing safety frameworks that far surpass the traditional policing methodologies and are also focusing on increased implementation of Technology. A lot of awareness programmes have been conducted and hence there is an increase in reporting of the cases. Patrolling by our officers has been strengthened with the augmentation of vehicles, including Patrol Cars and Blue Colt Bikes. On average, our Patrol Vehicles, including Blue Colt vehicles respond to over 4000 calls a day out of which, 800 calls pertain to offences against women.

How many CCTVs have been installed across the city, keeping in mind the safety of women? — Sandhya

Smt. Swathi Lakra IPS – The Telangana State Police have been working consistently to ensure the safety of women in public places and roads. In this regard, 7,91,152 CCTV cameras have been installed. With the installation of these cameras, we are able to not only prevent cases but also detect the cases within 24-48 hours.

How effective and prompt have the SHE team’s responses been attending to distress calls? —Sirisha

Smt. Swathi Lakra IPS – SHE Teams is India’s first and today, the country’s most replicated Anti Eve Teasing Intervention model. However, one should be clear that SHE Teams is not an emergency response team. It is a team that works behind the scenes over reported issues and takes action. It also undertakes incognito patrolling of public spaces. For any distress or emergency situations, one should Dial 100 where the Police Patrol Team will respond. If required the complaint will then be forwarded to the SHE Teams. The concerned units of SHE teams take up the cases and prompt action is being initiated.

What challenges has the SHE team been facing off late? — Bhargav

Smt. Swathi Lakra IPS – SHE Teams of Telangana is a constantly evolving unit that is reinventing itself frequently based on the needs of the citizens of Telangana. I cannot single out one challenge that the SHE Teams unit is facing which stands out at this point in time. However, from a women safety perspective, we have observed that in addition to Domestic Violence Issues and NRI-related issues, increasingly Cyber Related threats and intimidations are being reported. At the Women Safety Wing, we have formed dedicated teams to facilitate speedy investigation into such crimes. However, in most of these cases, prevention is better than remedial action, and ensuring that citizens, especially women, are sensitive about such crimes is a continuing challenge that we are working on.

What are the most common complaints that women of Hyderabad have been reporting? —Manjula

Smt. Swathi Lakra IPS – Out of the various types of harassment cases that are received by the SHE Teams, the most common complaints are about harassment over the phone followed by misbehaviour in public places, harassment through social media, and stalking.

How is quick and timely help ensured for someone who calls in distress? How much time does it take to reach a caller—Sruthi

Smt. Swathi Lakra IPS – There are several ways to reach out for emergency response in Telangana. The state was among the earliest implementers of the Dial 100 model of emergency response which ensures timely help. In addition to that, you can also dial 112 or use the HAWK EYE app. In the rare event that you do not have a phone, you should make all attempts to attract the attention of passers-by and also train yourself on basic self defence techniques for your own protection. The current response time for Dial 100 calls averages around 5-10 Minutes in Urban and 15 -20 Minutes in rural areas.

Many women in the city are working in shifts / late night hours. Is there an app, which can come to their rescue in case of adverse/ alarming situations? —V Nagendra Kumar

Smt. Swathi Lakra IPS – In case of emergency, citizens are requested to dial-100. Alternatively, HAWK EYE App is an effective App wherein any woman in distress should press the SOS button and a message goes to 5 persons-Victim’s family members, friends, and also the police. An important feature of the App is that it gives Geolocation tracking of the victim till she reaches her destination.

Quite a few women are taking metros and other kinds of public transport these days. Can you please suggest some safety measures to be taken to protect themselves? Alekhya

I am a government employee. I am facing harassment every day at the office. My colleague, who is junior to me, has been passing vulgar comments and double-meaning dialogues. Though I brought this issue to the notice of my superior nothing has been done as he is acting innocent in front of them. Many suggested I get transferred to other sections, but they are not ready to initiate action against him. I am depressed. Kindly guide me on how to tackle this situation. — Chitra

Smt. Swathi Lakra IPS – There are two remedial actions you can choose from. The first is to make a formal complaint in writing to the Internal Committee(IC) appointed under POSH Act, Sexual Harassment of Women at Work Place (Prevention, Prohibition and Redressal) Act, 2013 at your workplace. You can also fi le a Sexual Harassment complaint at the Police Station where you work or where you live. In case you are from Telangana and need support in reaching out to the jurisdictional police station, you may contact SHE Teams in your area or connect with the Women Safety Wing.

Mam, can you please tell me how can I escape from my stalker —Sridevi

Smt. Swathi Lakra IPS – Dear Sridevi, Stalking is a criminal offence and is punishable under law. Both physical and cyber stalking is a crime. You are requested to collect as much evidence as is safely possible to establish stalking and fi le a formal your jurisdictional police station. You approach SHE Teams through any of the various platforms available.

How to Reach Us? 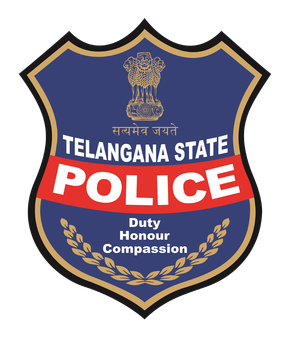